Last updated by: The Digital Bridges February 12, 2018 in Gadgets 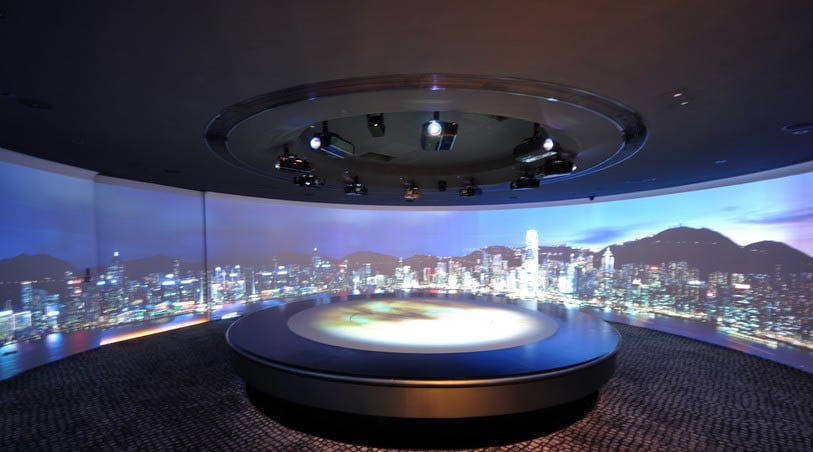 The latest trend gaining steam in the technology world is 360 degree video. Virtual reality gaming has led to a demand for more immersive experiences. 360 projectors are the answer to this demand. There are not too many 360 projector options available on the market, even for business use. That is why it is important to invest your money in these expensive gadgets carefully, just as you would for a photocopier machine. Find out the top 360 projectors available on the market below to create an immersive marketing experience to entice consumers to patronize your business.

The MKPlayer 360 is a three-hundred-and-sixty-degree projection device by a company called BroomX. The 360 degree video provides an immersive, virtual reality experience in any room. That way, VR gamers do not have to wear a cumbersome headset just to enjoy the virtual environment. This 360 projector is incredibly user-friendly. It allows users to control the images they project from an easy-to-use smartphone app. If you are looking for an accessible 360 degree projector that lets you immerse yourself in another world, consider the MKPlayer 360 device.

The company Igloo designs 360 projection domes for all different types of organizations. Igloo offers entirely turn-key solutions. That makes CAVE automatic virtual environments easily attainable for all business owners. They offer projection domes, projection cylinders and the servers and software necessary to handle the task of virtual reality projection. If you want to benefit from an established company who employs experts in the field of 360 visualization technology, consider working with Igloo.

The Immersis is a 180 degree projector, not a 360 projector. Despite this, the immersive gaming and video gadget makes it easier than ever to create a cube automatic virtual environment, or CAVE. Instead of having to utilize six projectors or more to create an immersive environment, you just have to use two. The Immersis projector is in development right now, thanks to Kickstarter backers. You cannot yet purchase the device. Once it does come out though, this may be one of the best projectors available to create a virtual reality experience the whole room can engage with without having to wear on ear headphones. Keep that in mind, and keep Immersis on your radar.

Pacific Domes offer another turnkey 360 projection service that can make VR marketing attainable for all businesses. The do all the work for you to create 360 degree projection dome theatres that offer an immersive experience to viewers. With their 360 degree projectors, you can experience a whole new world of visual technology. You will not however, be able to keep the projection technology after all is said and done. If you need to use a VR projector for just a short while, consider doing business with Pacific Domes for all your 360 projection needs.

If you are a business owner, you definitely want to capitalize on the hot trend of VR marketing strategies before you worry about investing in a wireless printer. Unfortunately, 360 projectors are hard to come by. Now, more virtual reality services are becoming available that will create a 360 degree cube automatic virtual environment. Consider the top VR projectors mentioned above. These 360 projector solutions offer the perfect way for tech-savvy business owners to bring immersive VR technology to their organization. These 360 degree projectors are sure to be worth the wait.