Last updated by: The Digital Bridges June 1, 2018 in Digital 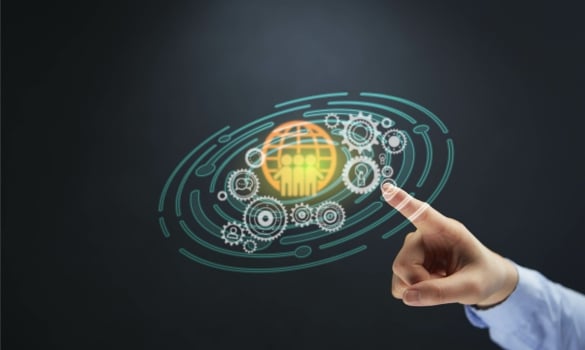 Technology is constantly presenting humans with new ways to solve problems, communicate and live their daily lives. Digital technology has made tremendous contributions to a variety of industries including medicine, travel and entertainment. However, digital technology has also introduced the great debate: Digitalization versus Digitization. The two terms are nearly identical, so it is easy to see why people may confuse them. Many even argue that they do, in fact, mean the same thing. In actuality, they are both unique terms that identify a particular function or aspect of digital technology. And fortunately, these terms are not nearly as difficult to understand as nonrepudiation. If you are interested in learning more about the digitalization process, its benefits and how it differs from other similar terms, keep reading below.

Automation is defined as the use of computers or machines to control a particular process in order to increase efficiency. Generally, this means a faster, human-free way of doing something, much like a robot factory. Automation is often implemented in factories, but you also experience it every day with phone calls and self-checkout registers in the grocery store. Automation is the use of technology to improve less efficient human tasks.

Digitization is the representation of an image, sound, document or signal through a series of numbers, usually zeros and ones. Essentially, it is the process of converting something to digital technology. This could also mean the conversion of analogue source material into a numerical format. It does not include something like structured cabling. It deals directly with specific information, unlike digitalization as seen below.

What Is Digital Transformation?

Who Needs To Know?

It is not enough to just know the difference between digitalization and digitization. It is also important to have an idea of what these terms and practices could mean for you. Business owners, health care professionals and finance workers should all be aware of the three terms above, before considering a Business Comcast solution. It is likely that you already have seen automation or digitization in action in your workplace. In fact, many businesses and organizations are in the process of digitalizing. This is something to look out for.

What Are The Benefits?

The benefits of using technology to increase revenue or otherwise improve a business model are plenty. Digitalization brings increased productivity, a more positive customer experience and greater opportunity for growth. This is especially true in the area of unified communications. By implementing digital technology into a business or industry, those organizations can focus on evolving.

Digitalization and digitization are often confused or dubbed synonymous. However, there is an important and distinct difference between the two terms. Digitalization is the act of implementing digitized technology on a large scale, like utilizing ecommerce platforms in a corporation, while digitization is the conversion of materials to digitized technology. Now that you understand the difference between these two terms, consider how they affect your every day experience.