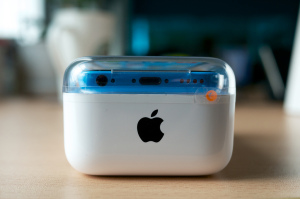 You never too old to learn a new trick. In fact, most people who think that they can’t learn new things, often don’t. However, those who believe that they can learn new things and progress, often learn way more than most. This 39-year-old was a handyman who spent his whole life working with a hammer and surge absorbers. In fact, he actually told me that he doesn’t know anything about electronics gadgets.

Thanks for the Apple iPhone 6 coming out, Walmart dropped the iPhone 5C price down to $0.97. Since he was on a TracFone, the handyman thought “hey, I should get a new iPhone instead of an LG phone.”

The handyman went out and got an iPhone 5C for himself instead of its tphone competitor. After a few short days, he was sending me text messages through Siri and watching his local news networks right from his iPhone. He said, “this device has changed my life.”

I love this story because the handyman who never worked with technology, embraced innovation or purchased the latest gadgets, was able to enhance his life dramatically for a very low price. You can probably bet where he lands in the Mac vs PC debate now.

I’m sure it will be no time before he starts sending pictures, Snapchats and whatever else he decides to do. Whatever it is, I know that his life is better now that he has better technology in his hands. He can quickly access information for his favorite restaurant (a little Italian place with awesome lunch specials), but that is just one small example. iPhones have even changed the way car accessories are produced. But these small moments add up. If we live every moment of our life to the fullest, we’ll have lived a full life of great moments. Technology like the iPhone helps us do just that, live for better moments.

This is just one example of the many ways in which the iPhone has changed society. Really, one of the largest ways that the iPhone changed the world is that it changed the way people interact with computers, which has remained much the same since the days of the Vax computer. In 2007, right before the first iPhone launched, a phone was not seen as a computer or even any type of computing device. Mobile users typed out text messages on T9 keypads (remember those?) or physical qwerty keyboards that added unnecessary bulk to phones. However, the iPhone allowed users to interact with their devices all using the touchscreen gestures. This revolutionized the concept of technology and computing as we know it, which is arguably one of the largest impacts of the iPhone.

Before the iPhone, mobile applications were limited to text messaging and email. Since the iPhone was first developed, mobile applications have exploded. Mobile apps are available on almost every smartphone you can think to name. They are available for almost every big name software and website, and SlashID is no exception. Without the iPhone, this would not be the case. Clearly, the iPhone has had a tremendous impact on society in many different ways.

Even with every release of a new iPhone, Apple is still furthering its lasting impact on society. You are sure to have noticed, if you pay attention to tech news, that every time Apple releases a new iPhone, those same exact features get replicated by the Android phone equivalents, though perhaps with less data security features. Clearly, Apple has impacted the technology industry and its level innovation. It is also clear that even in 2017, iPhone releases still have a huge impact on society with the lines that stretch for miles outside an Apple store. It truly is incredible that over 10 years later, society is still just as affected by the iPhone and the Apple company so profoundly.

Do you know someone whose life is been changed by technology? If so, share your story in the comments below. Or, do you know someone that could really use an iPhone or advancement in technology in their life? Then please share this post but then some maybe go get some inspiration to try out some new things and see how easy technology can really be. Furthermore, if you do nothing else, please encourage other people to embrace technology and the change around them because that’s the world we live in today.