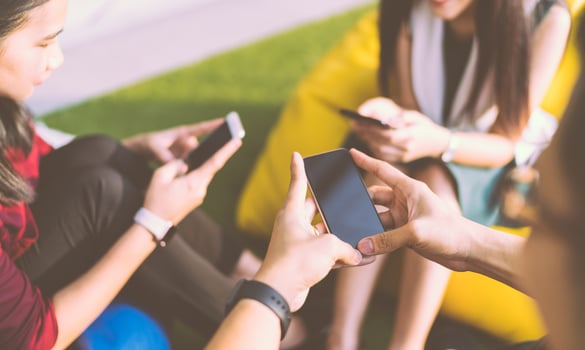 Today you see them everywhere, on busy streets people walking with their heads down oblivious to the world. In New York, Chicago, and LA it’s the same. In China half a billion people rarely look away from a tiny glass window that is their window to the world. Social Media connects the world and yet no one seems to have time to talk face to face anymore. It seems impossible to live in the moment in modern society.

The Smartphone has changed the world. People can connect with friends, family, and work with a flick or the swipe of a finger. But, this and other gadgets and digital devices have changed how we relate to the people and world, around us. This essay will highlight some of the changes that are/will be affecting relationships and it is already happening today.

According to a recent study published by Sage journals, just the presence of a cellphone during a face to face conversation actually inhibits development of trust and intimacy. In addition, the study claims that the presence of cell phones reduces the amount of empathy individuals feel from their partners. These devices impact relationships even when not in use. This is an enlightening concept for many mobile device users, who do not see beyond the implications of cell phones on telecommunications.

Social media sites like Facebook, Twitter, and in Asia its WeChat. People broadcast live in this virtual world everything they say and do with their group of friends, family, acquaintances, and even total strangers.

It has its good points. You can keep in touch with distant members of your family who live across the country with social media or TelCan VoIP advatanages. Forced by economic hardships to work abroad, Philippine families with their smartphones, stay connected.

However, there is a dark side as well. Online bullying has caused some to commit suicide. Being “Unfriended” on FaceBook carries a social stigma, which ostracizes one from the virtual community. This was never common when 2 way radios were the only mobile device. Relationships are paraded that once were private, now for all to see. Boys, post the number of girls they are dating and their faces appear on their Facebook page in the same way a hunter displays his trophies. Girls tell all their secrets online. Avoid spending too much time adding media mentions or monitoring your own. Then, you can reduce online bullying.

People’s lives are ruined and emotional attachments are forming in this imaginary world that are now causing divorces as digital adultery is becoming rampant. In addition, personal social media postings and content has even been shown to impact divorce settlements in court. Text messages are now causing national scandals and political figures are exchanging sexual filled content with women they meet on the street. See the types of statuses on Facebook.

It used to be that a person would meet someone and an affair would ensue. The affair would be secret and they would sneak off to an out of the way hotel or other secret rendezvous spot. Now, message and they can have their affair at the breakfast table while their spouse sits across from them oblivious to what text messages are passed back a forth.

Of course, nowadays both parties are looking at their smartphones. Men are probably checking the latest NBA general manager updates, women are checking social media and if children are in the room, they too are looking at theirs as well. So even when in a room with our families we are somewhere else.

You can see this phenomenon even in intimate settings at a restaurant. You see a man and woman eating a romantic dinner, candles are lit, the wine poured, and both are busily texting or engaging on their latest cool tech gift. Rarely do they make eye contact.

The people are being isolated from each other and my Psychologists fear that soon we will lose the ability to communicate directly face to face and form real relationships.

Already the numbers of violent events and even murders are on the rise is occurring in our society. These are the result of people not being able to deal with human interactions. People cannot relate and communicate anymore with their fellow man. Spend less time media monitoring in your free-time to improve human relationships world-wide.

1,000 Channels And Virtual Reality Too

The desire for new and novel means of entertainment is growing in leaps and bounds. Once, people turned to escapist literature to avoid life’s pains. Now few read even one book a year. Instead, they immerse themselves in the tube. However, the small number of venues has multiplied into a plethora of a 1000 channels on TV. No matter what your interest is, you will find a channel that fits your niche, Sports fans now have 24-hour access to almost any sport they desire. If you are a foodie, you will see the cuisines from a 100 different countries and new food fads and taste treats bombard you each day. With your smartphone, you now have access to unlimited knowledge and entertainment venues. This year, Virtual Reality, which puts you into the entertainment environment, has arrived in the market place. Soon you won’t watch a thriller, fantasy, and sitcom. You’ll be in them as well. So, in a few years will we be able to distinguish the real from computer generated?

Computer generated 3D People populate these 3D worlds and soon a new revolution in social media will occur as Virtual Reality meets Facebook. You will then meet and interact with computer constructs that you cannot tell from a real person. Does this mean you could fall in love and form a relationship with someone’s virtual online persona or avatar?

What happens when you find out the truth? This is a question that no one can answer and only time will tell what the results will be.

Already, the signs are here. The first quantum computer just went into orbit, which will bring the Internet faster speeds and expand a computer’s processing power immensely for faster spreading of future digital candystorms. True AI will soon become a reality and coupled with the predictions and projections for Social Media and Virtual Reality, this could mean, in a short time, that person you meet in an online dating site and fall in love with may not be human at all.

One area that has hugely improved thanks to the popularity of mobile devices is customer service. Mobile capabilities allow organizations to speak to their audience in a much more direct, personal manner. IBM is one company that is capitalizing on this opportunity with their new Verse platform. IBM Verse promises to revolutionize the way people work. Verse combines social media and Watson analytics using the cloud to power a more intuitive email. IBM Verse email platform is one project that is capitalizing on the positive side of how devices impact relationships.

Furthermore, modern devices impact relationships because usage is contagious. When you go out to dinner with your friends and they all sit around on their cell phones, you do the same. The same goes the other way around. By reducing your own mobile device usage, you can lower the amount of time others spend on their technologies. Set limits on how much you use app platforms to improve your relationships.