Last updated by: The Digital Bridges August 1, 2017 in Gadgets 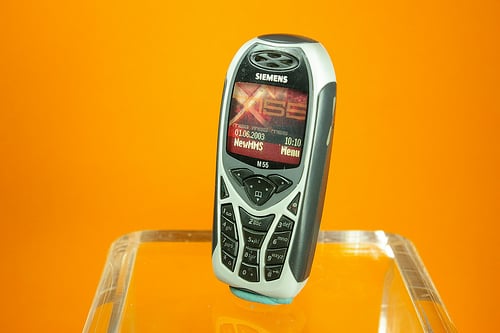 The Siemens C61 is an AT&T cell phone that was discontinued just a few years after it was released in late 2003. This phone, like many of its time, was celebrated for it compact size and innovative features which included internet access, picture messaging and custom ringtones. These special features soon became commonplace in the mobile communication industry and the Siemens C61 quickly became outdated. Smartphones with dozens of apps and designs have become the new norm. However, if you want a no-frills phone because you are sick of watching unbrick iPhone video guides, there are still plenty of options available for you. The Siemens C61 may have been discontinued, but below is a list of some excellent alternatives for all of your calling and texting needs.

These two phones, both released in the early 2000s, are very similar. However, the Siemens C61 edges out its predecessor with a user rating of 8.5 out of 10 on various ratings websites. The most notable difference between the two Siemens models is the camera. Siemens improved on their previous model, the C60, by including a camera in the C61. The .3 megapixel camera did not take very high quality photos however, it did have flash capabilities, which was incredibly innovative at the time. If you want a no-nonsense phone like your previous Siemens C60 or Siemens C61 model and do not have a need to download the latest Bumtop app, keep reading.

What were some of the most identifiable features of the Siemens C60 cell phone? This outdated mobile technology device featured interchangeable covers and soft keys, unlike most phones of today. It also weighed just 3 ounces, which is unheard of by today’s standards. The phone also had a 101×80 resolution LCD display and a .3 megapixel VGA camera with flash. That is about it. No application capabilities like you can now have on a large tablet. The C60 cell phone features were just the absolute must-haves in mobile technology, no more.

The LG Exalt is the best basic cell phone of the year. The LG Exalt is a small flip phone, weighing in at just under 4 ounces. Its features are extremely basic phone components. The phone sports a three inch display and only a two megapixel camera. However, it also includes Bluetooth connectivity and a microSD card slot so you can plus it up with additional phone accessories. The Exalt battery lasts almost 680 standby hours, which is much better than the best smartphones on the market. If you do not care about downloading the latest taxi app and want a no frills phone that is similar to the old Siemens c61, consider the LG Exalt.

The AT&T Basic Phones section is a great place to search for your Siemens C61 replacement. One of their best basic phones is the AT&T Cingular Flip, which features some more modern editions on a classic phone. Although the Siemens C61 had picture messaging, there was not many phones with camera capabilities. The AT&T Cingular Flip solves that problem with rear-facing digital cameras that can capture both video and photos. This little upgrade does not take away from the cell phone’s ease of use, however. All of simple functions you need are still available on this Siemens alternative. However, the AT&T Cingular Flip also boasts a more modern design with sleek and slim lines. If you want the perfect marriage of functional and simple, the AT&T Cingular Flip is the phone for you.

For a design that more closely resembles the Siemens C61, consider the LG Cosmos 3 from Verizon. This alternative has the simple design of the Siemens, with the updates and extras you may want from a modern smartphone. With email, alarm clock and a special slide-out QWERTY keyboard, the LG Cosmos 3 brings functionality to a whole new level. You can still enjoy the simple design of the Siemens C61 with the phone’s simple front screen and keypad. However, you also have the option to check your email or surf the web if you are not concerned about how devices impact relationships. The LG Cosmos 3, like the AT&T Cingular Flip, has a camera which makes it a great upgrade from the old Siemens model. With all of the most useful features of a smart phone and the simplicity of a Siemens C61, you could never go wrong with the LG Cosmos 3.

The Samsung T199 is a T-Mobile phone that has exactly what you need and no more. That means you will not be able to link this phone to your new fitness technology bracelet. This phone, with a similar front screen and keypad to the Siemens C61, is exactly the kind of no-nonsense phone you need. The 2″ screen is perfect for calling and texting. If you do not mind a T9 keypad , then the Samsung T199 should be perfect for you. This Siemens alternative does not have a camera or many other extra features. If you want to stick with the basics, the Samsung T199 is the phone to choose.

Although the Siemens C61 was discontinued, there are still many simple phones out there for anti-smartphone users who prefer to watch TV shows on an actual TV. Whether you are looking for something simple and classic or something with a few extra features, you can find a basic phone that fits your needs. If you have any thoughts about the basic vs smartphone debate, let us know in the comments below!