How Tech Advancements Are Creating Wins For Digital Businesses 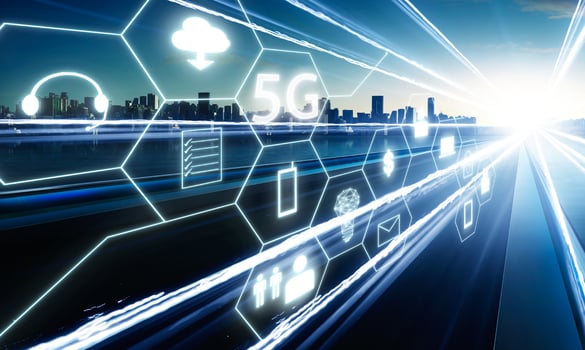 The vast majority of the population are acutely aware of the continued advancements in technology, and how they are impacting everyday life. Whether this be the use of ‘smart devices’ or similar, innovative technology continues to be a core component on the efficiency scale, in relation to both business and home life. The current terminology used to describe these processes is, the IoT or the Internet of things, that alongside the roll-out of 5G, are set to play a major role in business growth and expansion.

IoT effectively works through systems and assets being connected by internet to exchange data to devices at ease. In terms of the output and potential that could be realized, this is a similar advancement in technology to that of 4G and smartphones in the past. With seamless communication in business becoming an ever-growing requirement, connectivity when not connected to WiFi is essential. The rollout of 5G is likely to further empower this field, as the next generation of communication.

These all add to the endless technological advancements of the last decade, not discounting Artificial Intelligence or Machine Learning and Edge Computing. Innovation managers are working on many advancements including augmented reality and virtual reality too. Each are playing key roles  in streamlining business processes.

Moving back to 5G,  in a process that is being described by some as the ‘Fourth Industrial Revolution, the advancements are such that the capacity and speed of digital cellular networks are revolutionary, and something that is unlikely to be bettered for a substantial period of time. These changes mean businesses can provide fast, more reliable and efficient services, which is going to transform the digital world. It really sets up for a promising future for businesses with their online services and offering.

5G will work through the cloud, meaning this will eliminate the necessity for cables. In Layman’s terms, cloud computing works by storing data for the device through the internet, as opposed to the computer’s hard drive. As such, data is more readily available, and in the eyes of many, is potentially more secure.

The most exciting aspect of 5G for most,  is the improved speed of the internet. It is believed this will be around 100 times faster than 4G, with a much greater response time. The 4G network responded in just 50 milliseconds, but this will now be reduced to just one millisecond on the 5G network. As such, the response time will be a phenomenal 400 times faster than a blink of an eye, which is somewhat remarkable.

A range of industries across the globe are likely to benefit, perhaps none more so than the gaming industry. Aside from better graphics, latency will likely be a thing of the past- with expected results set to deliver this at a level of 5ms or lower. Users of social gaming sites, for example, will see improvements to dynamic in-game advertising – with users who don’t have the actual game installed on their phone now seeing more readily available access to the purchase of chips, coins, level enhancements, and so forth.

The implementation of 5G will be likely ensure that vehicle development is far more intelligent, with the ultimate goal being to enhance safety, and save lives moving forward. This industry is set to grow greatly in the coming years, alongside the emergence of more and more electronic vehicles. The Advanced Driver Assistance Systems (ADAS) is a great example of the IoT in the automotive sector, with its implementation being far more commonplace as technology in this industry continues to develop. These have warning systems in place that react with the data they pick up from others vehicles around them.

5G modems and connections are expected to have expanded across a great proportion of the world’s population within the next few years, and it remains to be seen the exact impact it will have. In what is just another cog in the ever expanding IoT wheel, one thing’s for sure – the future certainly looks bright.

Moreover, Iot and 5G will support growth within augmented reality gaming. Since the first successful AR apps have been launched, many other gaming platforms are creating new virtual events that change the way you experience reality. This technology could lead to entirely new ways of gaming using a variety of franchises, formats and players. For all types of digital businesses, AR presents an incredible opportunity to think outside the box and get creative with the experience of gaming.