Last updated by: The Digital Bridges February 2, 2017 in Software 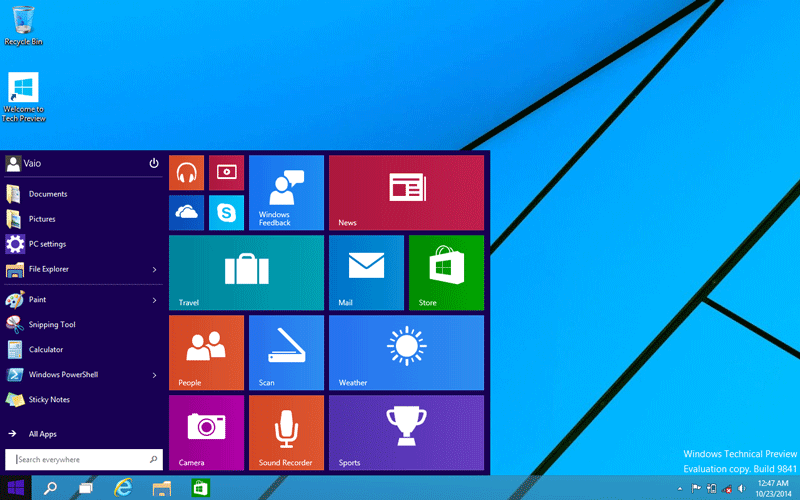 Windows 10 is a personal computer operating system developed by Microsoft. This new version came out in the summer of 2015, so we have had plenty of time to go over all of its new features. Our Windows 10 review will focus on the top six best new features of this operating system. For an overview of our favorite aspects of Windows 10, keep reading below.

It’s the simple things in life that mean the most, and this is no exception for Windows 10. After making the mistake of moving their start menu to a new location in Windows 8, Microsoft has taken consumer feedback into account when designing their latest operating system update. No more need for computer training just to find the apps your use most. The new Windows 10 start menu is back where it belongs in the lower lefthand corner. Even better, it now combines the traditional regular menu with the functionality of Live Tiles, which feature shortcuts to your favorite apps. Overall, we love this Windows 10 update.

If you have ever wanted a personal assistant, Windows 10 may be the operating system for you. You will no longer have a need for your Siri for Android apps. Cortana, the Windows phone assistant, is now featured on laptops everywhere. Cortana can help you search documents, locate apps and even schedule reminders across all of your Windows devices. Like many competitor’s phone assistants, Cortana is also voice activated. This is a super handy feature, so we are glad Windows 10 welcomed Cortana to the party.

If  adding in a personal voice assistant was not enough for you, Microsoft also changed the game with their new web browser. Internet Explorer is still included in the system, but now Edge is too. Edge is a browser customized to work with Windows 10 and tablets that use it in the best way. Cortana is fully integrated, so she can help you with web searches easily. This browser is also built to help your laptop battery last longer, so you can stream hours and hours of Netflix without a charger. However, this is not even the coolest feature of Edge. This new Windows 10 browser allows you to draw and make notes directly on the web! Using virtual sticky notes, highlights and pen functions you can write down your thoughts onto any web page and share them through OneNote.

Another great update from Windows 10 is the addition of multiple desktops and a task switcher, for more streamlined multitenancy capabilities. The multiple desktop feature allows you to put different browsers and documents into different pages. This can be useful for students, who want to keep their academic and personal desktops separate to avoid procrastination. The task switcher also allows you to move between apps and desktops with ease. One quick click and you can see all of your open pages on one screen. Windows 10 made great improvements with so many of these practical features!

Another feature that makes Windows 10 the best Windows operating system the company has ever produced? The apps! Gone are the confusing Xbox branded entertainment apps. With Windows 10, Music, Movies and TV are appropriately named as such, and the apps themselves have become faster and better. You can integrate the Microsoft Music app with Microsoft Groove, the Microsoft music streaming service equivalent to iTunes Radio. OneNote is also an incredible app for note taking and much more. The improvements to old apps alongside the quality of the new apps introduced in Windows 10 definitely make this the best Windows operating system we have ever seen.

We would be remiss to mention some of the areas that Windows 10 falls short. After all, the operating system is not perfect. Windows 10 cons include the separate settings app and control panel, as it can be frustrating to figure out where to head for which controls. Another downside is that this version of Windows did away with the video editing app. If you use Skype, you will find that the continuity between the app and the Windows OS is not nearly as flawless as that offered by Mac product. Windows 10 mobile is also another downside, because it is not used by many of the apps offered. There Windows 10 downsides are negligible, but you should still do your due diligence to be aware of them.

Our Windows 10 review is in: we love it. From creating a cool new web browser to fixing their start up menu, Microsoft has really shown that they are constantly innovating. Their practical fixes are paired up with other fun features. All you need to download now is the new Adobe Soundbooth software. To learn about all of the new Windows developments, test out Windows 10 for yourself.